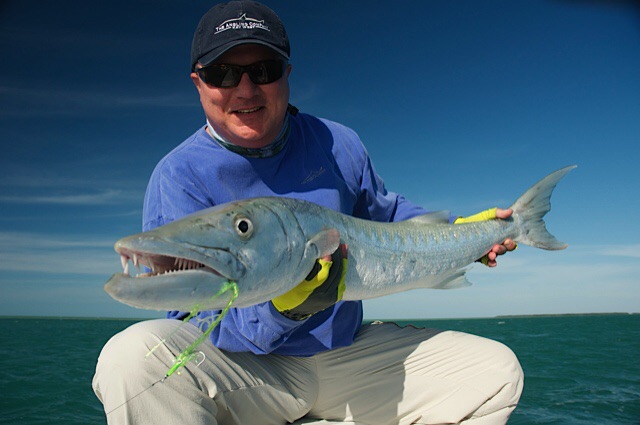 Well the 2015 Cuda Bowl is in the books now and as folks are preparing for Super Bowl Sunday we wanted to thank all of you who came out this weekend to fish and guide for a heck of a fun time!

Here are the final results:

Grand Champion Spin Division
Steven Brown of Warrenton, VA had a total of 268 inches recorded for the two day event. Brown’s largest fish was 53 inches and also helped him to win the title for Largest Barracuda on spin tackle. Brown was guided by Capt. Pat Bracher of Overtime Charters in Cudjoe Key.

Nathaniel Linville of Key West, owner of The Angling Company, took the fly division again this year with 187 inches recorded for the two day tournament. Linville was fishing with Capt. John Benvenuto of Key West.

Jim Knowles of Round Hill, VA took second place in the Fly Division. Knowles recorded 132.75 inches of barracuda caught on a fly rod. He was guided by Capt. Peter Heydon of Key West.

Jon Penning of Middleboro, MA took third place in the Spin Division and only by 1/2 inch over Bear Davidson of Catlett, VA. Penning recorded a total number of 249.75 inches of barracuda. Penning was guided by Capt. Bob Beighley of Double Haul Charters in Cudjoe Key.

John Chinuntdet of Mooresville, NC took third place in the Fly Division fishing with Capt. Justin Rea. Chinuntdet recorded 110.25 inches of barracuda all on the second day of fishing.

Lacey Kelly of Ft. Myers, FL was our top lady angler. Kelly recorded 242 inches of barracuda and maintained the lead over our other women anglers for the duration of the two day event. Kelly was fishing with Capt. Jared Cyr of Key West.

Lynn Bell of Summerland Key was a very close second with 230.25 reported inches of barracuda. Bell was fishing with Capt. Rob Kramarz of Chaos Theory Charters.

Ted Margo of Ft. Worth, TX not only had the largest recorded fly caught barracuda of the 2015 Cuda Bowl, but the largest on fly in the history of the tournament. His largest was 47 inches.  Margo noted that the two barracuda he caught on fly during the second day were his first ever. Margo was fishing with Capt. Drew Delashmit of Cudjoe Key, FL.

The Perpetual Team Trophy was donated by the Gravett Family in memory of their Dad, Ben Gravett. The Gravett family has been fishing the Cuda Bowl since it’s inception in 2011. The trophy will be on display at The Angling Company.

February 12th
Fishing Day
Meet up at South of the Seven in Sugarloaf Key by 5PM
Cash Bar & Appetizers for participants
Awards at approx. 6:30PM